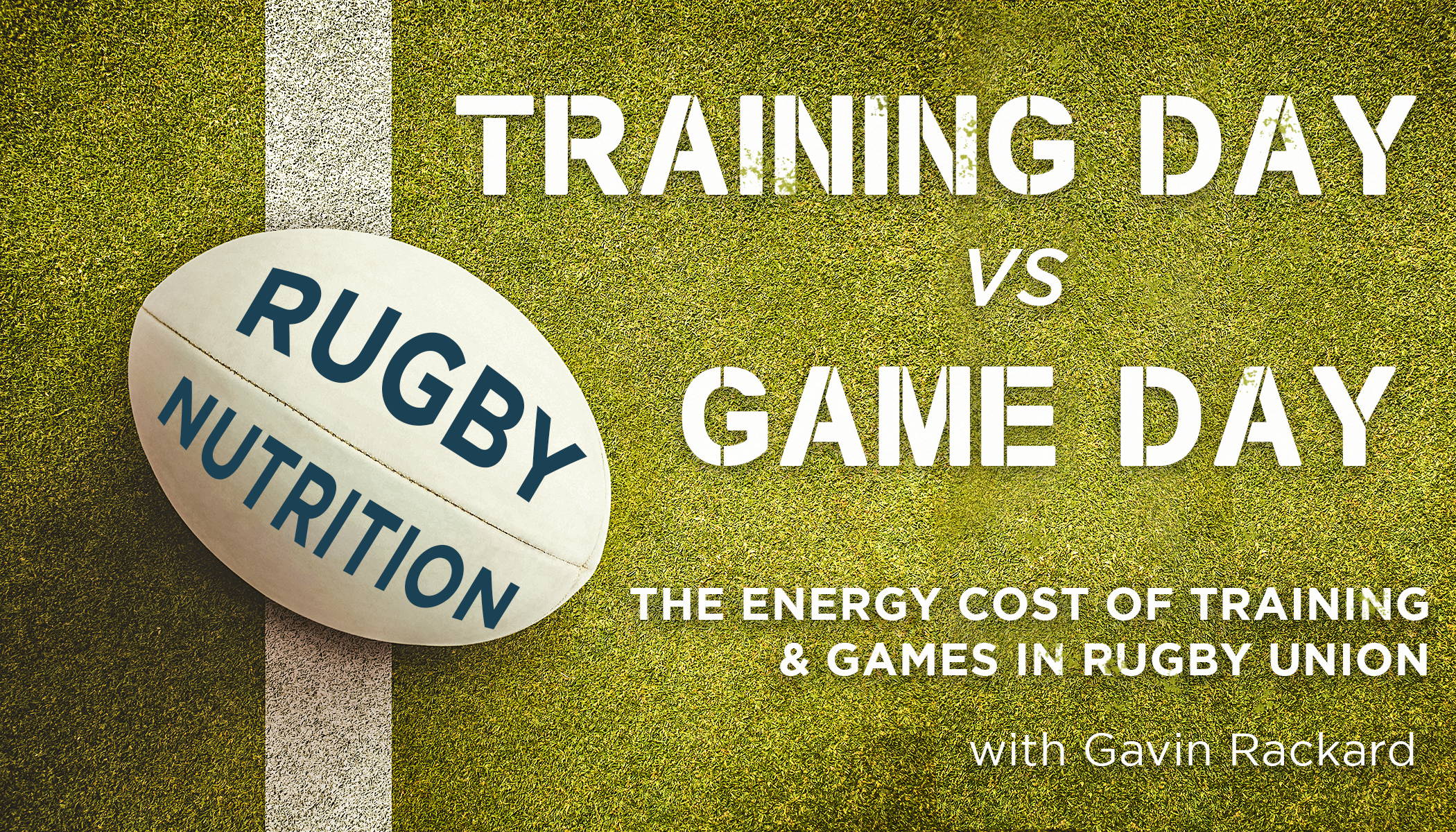 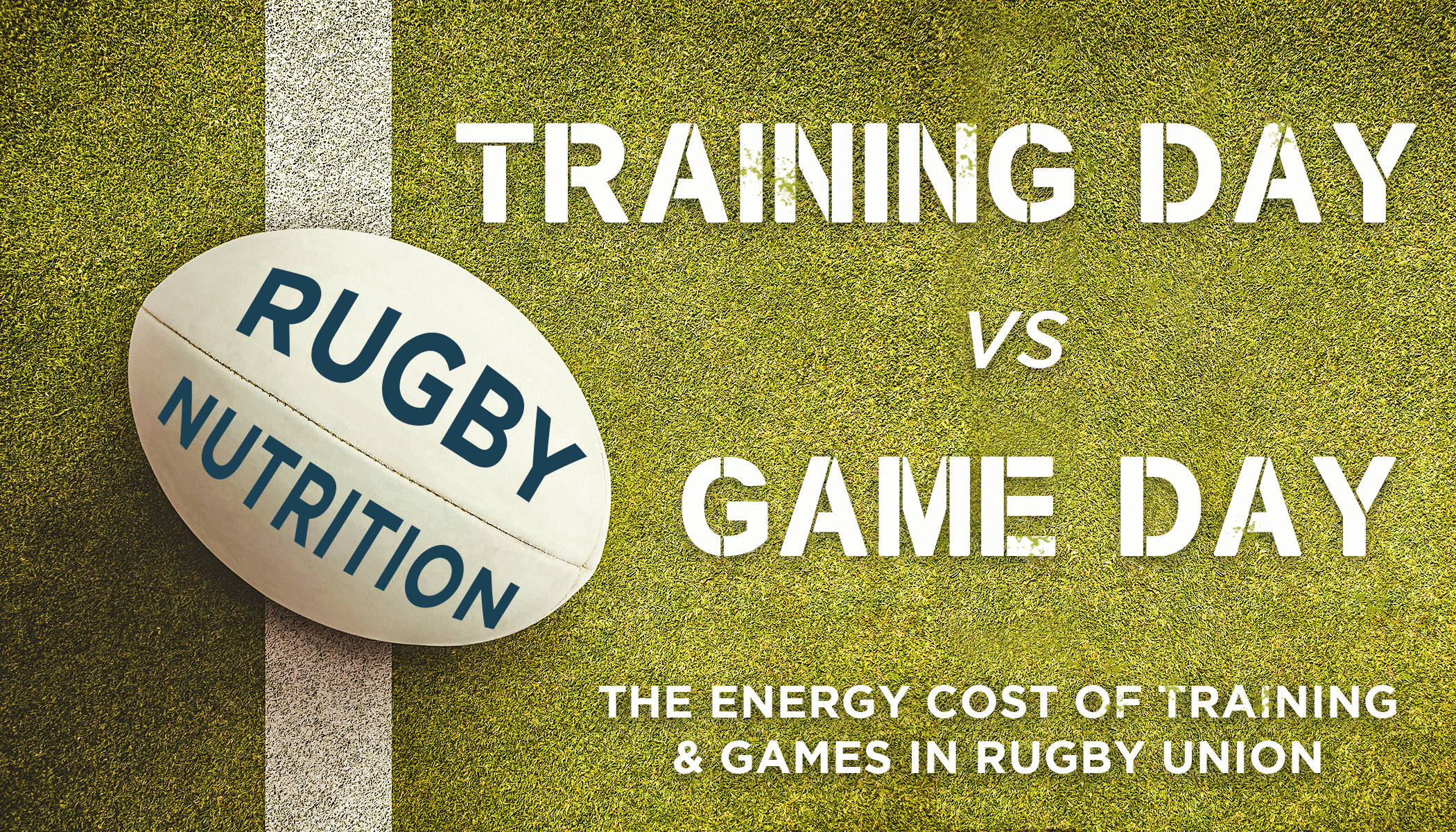 To understand the different fuelling demands of rugby union, the energy expenditure and physical demands of the game first need to be understood.

A person expends energy in 3 different ways, resting metabolic rate, exercise activity and dietary thermogenesis. This is no different for a rugby player. A 100kg rugby player that plays 80 minutes of rugby union could expend anywhere from 1400-2000kcal per game (Cunniffe, Baker, & Davies, 2009) (Smith, et al., 2018), another 2200kcal from their resting metabolic rate and another 10% expended from the amount of food eaten that day (450 calories from a 4500kcal intake). This could equate to 4000kcal – 4650kcal expended on a game day. Add another 500kcal on top of that for a 120kg front row or second row and there is a lot of fuel needed to replace the energy used.

High metabolic load distance (HMLD) is the total amount of high speed running a player does in a training session or a game, with total distance of accelerations and decelerations undertaken. The difference between a game day and training day in HMLD is that forwards might hit 392 metres (m) on a training day but on game day nearly double that to 667m. Whereas backs can hit 572m on a training day and hit close to 1153m on match day itself. As will be alluded to later, carbohydrate availability is necessary to fuel the repeated intensity needed as per the nature of rugby union. It is also worth noting that the non-walking distance by forwards and backs can nearly double on game day versus a training day, being 1688m to 3219m and 2284m to 4026m respectively. This clearly evidences the reason for a higher fuel demand on game day versus training days.

As referenced by (Bradley, et al., 2015) the 6-day rolling average for a normal week of rugby union training that included 3 gym sessions, 2 rugby sessions and 2 mobility sessions for backs was 3346kcal and was 3800kcal for the forwards. This included all preceding days before a game up to game day -5, did not include the game itself and included game day + 1. In effect, even with a rest and recovery day, where exercise expenditure is minimal, the 6-day rolling energy costs are very high for a rugby player!

(Cunniffe, Baker, & Davies, 2009) showed how these numbers above correspond to a case study with a back and a forward rugby union player burning through 1649kcal and 1959kcal, in a game, respectively. This number of calories is burned even when half time, warm-ups and cool downs were omitted. Another example of this is (Smith, et al., 2018) where the energy expenditure of 27 rugby union and league players are measured for 14 days in-season. The March-April period for the senior rugby union group expended 4761kcal per day weighing an average of 99+16kg.

What are the nutritional guidelines in rugby union?
And, are they being met?

Now we know how many calories a rugby player burns per day it is time to turn the attention to the nutritional intake. The former should be a guide for the latter.

(Bradley, et al., 2015) reported an average intake of 3600kcal per day intake in forwards and 3200kcal for backs. This, as mentioned earlier, was over a 6-day rolling average including 2 rest days and no match day. Backs were noted having 3.3g.kg. body mass in carbohydrate with forwards at 4. 1g.kg.body mass. Considering this is 45 elite European Rugby Union players it is very representative of what the dietary intakes are in elite rugby. Protein was approx. 2.5g.kg.bm for both groups and fat 1.0g.kg.bm. To put into context the dietary carbohydrate recommendations for high intensity sports such as rugby union can be 6-8g.kg.bm and which would mean 600-800g of carbohydrate for a 100kg player (Black, Black, & Baker, 2018). This 600-800g still holds strong for game day and game day -1 from a fuel and refuel perspective and referring to the HMLD and energy expenditure data this quantity of fuel is necessary to perform at the highest level during a game situation.

Regardless of the intensity of any given day the protein intake of a rugby union player should be consistent in terms of the 3T’s of total, timing and type to maintain their muscle mass and optimise muscle protein synthesis around resistance training. This means the total is approximately 2.0-2.5g.kg.bm of protein so 250g for a 100kg player, timing of eating a 30-40g source of protein every 3-4hours. The type should be complete protein sources in lean meats, oily fish, eggs & dairy. Alternatively, consuming something like a protein shake using Kinetica Whey can be a good substitute if you’re looking for a convenient option. Generally hitting between 20-30% of total calorie intake in fat or 1.0g.kg.bm of fat from again oily fish, nuts, seeds, avocados & oils is recommended.

The primary macronutrient that changes in rugby is carbohydrate and based off the energy expenditure data, it makes sense for rugby players to periodise their carbohydrate intake to optimise their energy levels, concentration and body composition.

Why does the carbohydrate content need to increase on
game day -1 and game day and what does this look like?
A training & match day summary.

Similar acute fuelling practices can be applied to pitch training as the game day, but the difference is carbohydrate loading on match day -1 (24-36hrs before the game) because of the increased match day intensity, as alluded to previously. This top up of muscle glycogen should slower the onset of fatigue during the game, hopefully improving performance. Aiming for 1.0-1.2g.kg.bm of carbohydrate (100-120g for 100kg players) 3-4hours in advance of the game is about correct (Williams & Rollo, 2015) so aiming for chicken with pasta and light tomato sauce, lean beef bolognese with spaghetti or some sweet potatoes and grilled chicken. This, along with 50ml for 1kg of your body mass on game day -1. 5L of fluid for a 100kg player that can come from water, milk, juice, teas and coffees.

During half-time energy or caffeine gels can be a good source of quick carbohydrates to boost energy levels and foods such as grapes, bananas, jaffa cakes or even jelly beans can also help top the fuel requirements along with 200-400ml of fluid.

Post-game it is important to remember the 3Rs. Restore, repair and rehydrate. Restore the carbohydrate or energy used, repair the muscle breakdown with a protein source or rehydrate as soon as is possible Kinetica Whey or Recovery can aid recovery in phase 1, within 30 minutes with a meal containing carbs & protein in phase 2 within 60-90 minutes. Again, another good option for those players that are time-poor is Oat Gain which contains the necessary macro and micronutrients to support the 3Rs. Similar post training practices can be applied to post-game, but the same quantity of carbohydrate might not be needed so whey protein can meet this requirement by aiding muscle repair.

The increased intensity and volume of games over training means an increased energy expenditure and due to the repeated sprint nature of rugby union carbohydrate periodisation is necessary throughout any week of training.